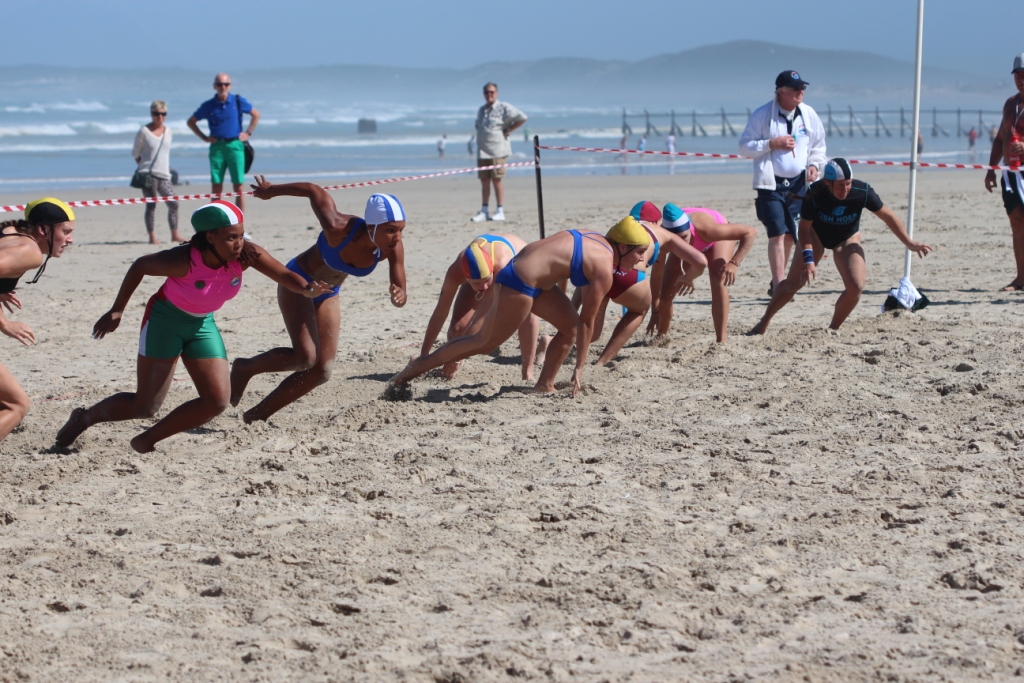 18 Apr False Bay Brings Back the Medals From WP Champs!

The Western Province Surf Lifesaving Championships were recently hosted at Strand Beach on the 1st and 2nd of March 2014 and turned out to be an extremely successful outing for the False Bay lifeguards. Not only was the team able to assert their dominance in the beach arena yet again, but for the first time in years, False Bay walked away with a few medals in the surf arena.

The day started off on a high note with one of the first events, senior flags, providing some outstanding results for the team. As expected, Ryle De Morney walked away with the title in the men’s final, while the women’s final saw three False Bay ladies represented, with two ladies ending up on the podium.

There were some more impressive results with the juniors making finals and individually, Inge van Dieman, taking silver in the u19 age group.

Lindi and Tayla both producing fine performances in the senior ladies flags.

Inge proving what she’s worth in the u19 ladies flags final.

That was just the start of the damage that was to be done on the beach, as the beach sprints came along, so did some more medals. Lindi and Inge again medalled, taking the gold and bronze respectfully in the u19 age group, while  Ryle again took gold in the senior men race.

Inge claiming another medal in the u19 ladies sprints.

Ryle cruising to another victory in the senior men’s sprints.

Rubin Mohammed, Tayla Faulmann and Melissa Corbett also made finals in their respective age groups. False Bay once again leaving other lifesaving teams in awe of our beachwork.

False Bay were doing what they do best and bringing in the medals on the beach, but what took everyone by surprise was the silver medal that the senior men’s and the bronze medal that the senior women’s tube rescue teams won. Taariq Hassiem and Kishan Kalan put in a stellar performance with Taariq racing to the bouy in second position and Kishan following through to save him.

Kishan ready for his stellar swim!

The team fought off some very tight competition to clinch the silver with Ryle De Morney and Chevan Clarke finishing off with the patient drag.

The women’s team also had to dig deep with Tayla Faulmann and Tiffany Combrinck pushing till the very end to secure their third place finish with Melissa Corbett and Lindi Le Brasseur winning the drag sprint to the finish line.

To top off this impressive display in the surf, our new recruit at her debut competition, Tiffany Combrinck, pulled off an incredible performance to finish in a very close second place in the u19 ladies surf swim to show true potential and made her mark that she is definitely someone to watch for the future in lifesaving!

Tiffany taking everyone by surprise in her first ever swim.

Heading back to the beach arena on the last day saw Rubin Mohammed claim his sure-bet gold medal  in the u17 men’s beach run with a confident performance.

Rubin showing his presence in the u17 boys long run.

The weekend ended with even more action on the beach as the beach relays lined up for the final event. False Bay walked away with three podium finishes in the four races with junior ladies team (Le Brasseur, van Diemen, Mohammed, Combrinck)  and both senior women (van Dieman, Faulmann, Corbett, Le Brasseur) and men’s (Hassiem, Clarke, Mohammed, De Morny) teams taking silver. The team finished off the weekend with great results with the junior team placing 7th and the senior team placing 3rd overall! The championships proved to be a great learning experience and contributed invaluable preparation for the upcoming National Championships!