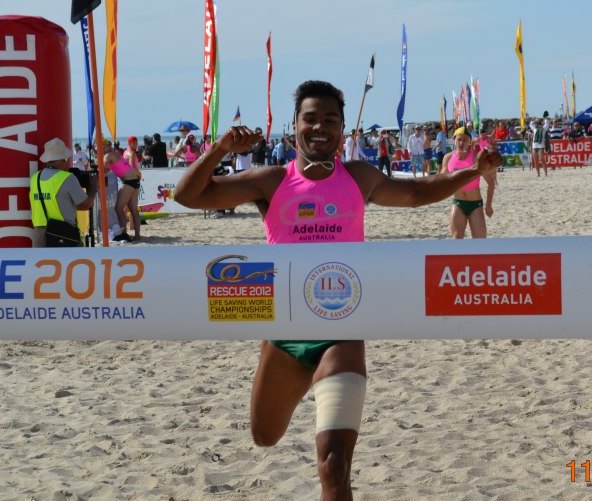 Ryle De Morny of False Bay Surf Lifesaving club was crowned world champion in the beach flags event held at the past 2012 World National Teams Surf Lifesaving Rescue Championships in Adelaide, Australia which occurs bi-annually. Ryle has fared incredibly well during his performances at various international events on the surf lifesaving scene, building on his performance from the 2010 Championships held in Alexandria, Egypt, where he placed third in the beach flags and first in the beach sprints respectively.

Ryle in action in the beach flags event at the World Rescue Championships in Adelaide.

With his trip to the 2010 championship dogged by a troubling hamstring injury that saw him deprived of a double gold in the beach events, it seemed as if he just couldn’t catch a break when a podium position in the beach sprints went slipping through his fingers at the 2012 championship again due to a sudden hamstring injury. Ryle valiantly went on to take 8th place in the final, after which some intense damage control was needed. Against all odds, he overcame the physical pain and pushed through to claim the title for the beach flags event, finishing ahead of New Zealander, Paul Cracoft Wilson and Australian, Thomas Nolan.

Clinching the beach flags title in the winning run.

Ryle’s result contributed to an exceptional performance by the South African national team, as they placed third overall behind Australia and New Zealand in the Surf Rescue portion of the competition.

Apart from his gold medal performance in the flags, he also formed part of the gold medal winning team that took the title in the ocean relay. The event comprises of four legs consisting of a surf swim, board, surf ski and run. Ryle, along with Chad Ho, Jayden Alford-Loots and Blane Wood, put together a stellar performance to overpower the expected winners, Australia.

Ryle finishing the final leg of the ocean relay to take the gold medal.

Barring any further unfortunate injuries, we’re all looking forward to some exciting achievements and perhaps a medal or two from our Ryle at the next World Championship to be held in La Grande Motte, France in late 2014!

In the meantime, check out the video of his final run in the beach flags final to take the title!